In collaboration with New Amsterdam Media and multiple contributions from students at USC (University of Southern California), I’m excited to announce the 2nd version on the state of the VR/AR industry white paper we’ve written is going live on its own website before the end of the month. The paper covers topics spanning everything from mobile and tethered HMDs and accessories to live-action VR and 360 cameras, as well as an overview of enterprise use cases and interviews with leading executives on the hardware, software, and content sides of the industry.

Today I’d like to introduce one section of the paper to our readers, highlighting several companies/projects to watch in the social VR space.

Although certain social spaces in VR will end up being more popular than others, eventually all virtual worlds will be seamlessly navigable. The term for the framework connecting all such virtual space together is called the metaverse. 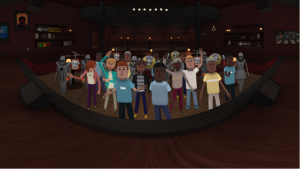 AltspaceVR was started in 2013 and developed using Unity and A-frame. It works with Rift, VIVE, and Daydream and Samsung Gear HMDs. The idea is for Altspace to “live” in WebVR and for anyone to be able to build and drop 3D assets or entire interactive experiences using A-frame, to as many devices as possible. Altspace has focused on hosting live events to bolster engagement and explore such a possible avenue for monetization, however, the company acknowledges that the social VR space is still very much in its infancy. In the next several years the goal is to build an engaging, monetizable, and scalable social ecosystem.

Spaces, the first major social VR experience released by Facebook, has been highly anticipated and generally well received. Oculus Rift users can enter a virtual space that they can share with other Rift wearers, as well as with friends via Facebook. 360 videos and movies can be experienced together, and users can create virtual objects in the space and choose from several facial expressions for their avatar to perform (which is created by an algorithm that analyzes your FB photos and can be customized with accessories). The avatars can even take selfies together with a virtual selfie stick, with the ability to post photos online instantly. Facebook is slowly but surely realizing its vision of enabling social VR. While the company may not have announced anything as ambitious as Sansar to date, it has a long-term roadmap for introducing social VR to Facebook users in the most natural and compelling way possible. 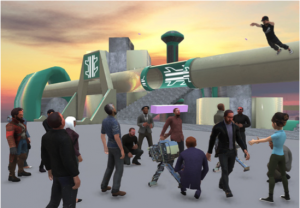 Phillip Rosedale, the founder of Second Life, left Linden Lab in 2009, several years after user growth stagnated at around one million. His own spiritual successor is based on his vision to democratize the creation and sharing of VR experiences. High Fidelity can be downloaded by anyone with a PC capable of running it and allow anyone to essentially host their own VR domain and allow anyone to create virtual experiences with basic coding skills. A sandbox creation toolkit enables those with no coding skills to create and share content. Rosedale still collaborates consistently with Linden Lab in the development of Sansar, seeing Sansar and Fidelity as analogous projects with differing approaches toward ultimately creating a social connection with VR. 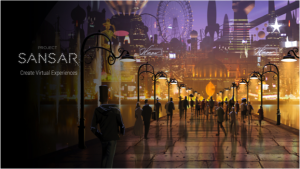 The company behind Sansar called Linden Lab also created arguably the deepest virtual online social experience to date called Second Life. Launched in 2003, the virtual world could be accessed by any baseline computer with internet, allowing users to create their own avatars and communicate with each other through text or voice chat while exploring the virtual world. Second Life had its own economy and currency (the Linden dollar L$, which could be exchanged for real dollars) as well as its own content creation toolset. Users developed communities and events in Second Life that touched on everything from politics and education to religion and relationships.

360 videos and movies can be experienced together, and users can create virtual objects in the space and choose from several facial expressions for their avatar to perform (which is created by an algorithm that analyzes your FB photos and can be customized with accessories).

Building on the success of Second Life (which is still actively supported and will be in the foreseeable future), Project Sansar will launch in open beta sometime in summer 2017 and will start to actively expand the interactivity of the virtual space as more users join the platform. Linden Lab will monetize by taking a small percentage from all transactions made by users. Support is planned not only for Oculus Rift and VIVE but also PCs (in 2D mode) and eventually mobile HMDs.

Instead of attempting to create a social virtual world and entice users to interact with each other in it, Pluto VR takes a completely different approach to social VR by enabling social interaction across current VR experiences that are already available. Users can join their friends and watch as they scroll through experiences on their headsets while they are inside the virtual space represented as avatars. The level of interaction is currently limited to talking and visual gestures with the avatars and Pluto is developing additional features to enable the sharing of other content. 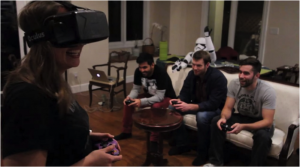 Unless your only friends are avid VR enthusiasts (wow) chances are most of them don’t own a VR headset, making most current social VR platforms a place full of strangers. SofaVR aims to break down the hardware barriers by developing short standalone social VR game experiences and enabling local friends with a smartphone to join in on the action. For example, the Oculus/VIVE title Ruckus Ridge pits one player in a VR headset with three others using controllers and watching a TV, in a series of fun mini-games. This allows VR enthusiasts and friends alike to participate and experiences VR in the most approachable way – socially and in small chunks.